An emollient and soothing flower 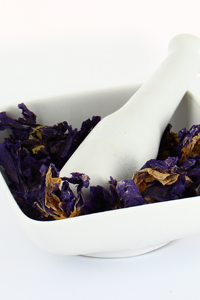 Mallow (Malva sylvestris) has been known ever since antiquity.  It is part of the Malvaceae family, and grows as a biennial plant commonly found in the wild.   This plant is originally from Europe, and is also referred to as common, high or tall mallow.  It is easily recognizable thanks to its large violet-colored flowers.

A Plant with Multiple Virtues

Nowadays, mallow is still used for its medicinal virtues.  It may be consumed as food, either cooked or raw.   It is used in cosmetics for the properties of its active ingredients, which make it emollient, soothing, effective as an antioxidant, hydrating* and refreshing.

Mallow water is obtained through steam distillation of malva sylvestris flowers.  The name “malva” comes from the Greek term “malakein” which means “soften” pointing to the plant’s emollient properties. 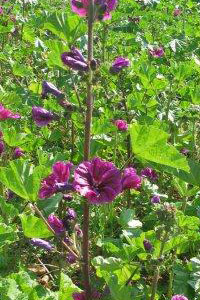 SO’BiO étic® has selected mallow flower water that is certified organic.
This certification is a guarantee of traceability all along the production process, from the initial supply of flowers to the final flower water, to ensure optimum olfactive and sensory qualities (verification that the product is free of pesticides).

SO’BiO étic® has chosen an all organic supply chain with flowers that are farmed, harvested and distilled in France.
* Hydration of the upper layers of the skin